You have more than me! Thoughts on fairness and 4 ways to make it better. 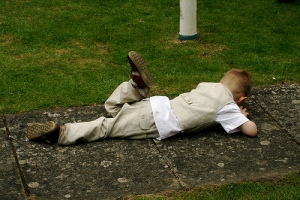 My four year old son was playing trains downstairs with two of his friends last week.  It was going great until one of the friends somehow ended up with 5 train cars while my son only had 4.  This sent my four year old into a tizzy in which he stomped out of the room and sulked on the floor in the kitchen.

“He has more than me.” was the response I got when I asked him what was wrong.

So trying to think quickly and forgetting that I was dealing with a four year old, I asked him if he had been having fun playing with four trains before he realized that his friend had five?  “Yes…but it’s not fair.  He won’t share and he has more.”

My equally “way-too-old” for a four year old response was, “but right now you have none – which is more fun, playing with four or playing with none?” I thought I had him here….

He looked at me with a quizzical stare and held up his hand with all five fingers out – “Five!” he said in response with 100% conviction.  Ahh yes, I’m dealing with a four year old mind.

One can understand this response coming from a four year old.  They have not yet reached the maturity level to understand that they shouldn’t  judge how happy they are by comparing themselves or what they have to others.

What surprises me is how often this same type of response comes up when we are working with adults regarding their incentive plans.

“It’s not fair” is by far one of the most common complaints we hear when we ask people about their incentive plans (particularly sales people for some reason).  When we probe to find out why, the answer usually is some variation of what my son said, “he/she has more than me.”  Here are some examples that I’ve heard (paraphrased of course).  To get the point, just say “it’s not fair” after each of them:

“I work my butt off but they don’t pull their share…and then we all have to share the team bonus.”  or “The company wants us to share knowledge and skills, but when I do, the others do better than me.  There is no team award.”

“He was assigned better leads than me.”

“She is in a faster growing market than me.”

“The big scary monster ate my train…” – oh wait, that was my four year old again…

You get the picture.  The fact of the matter is that no incentive plan is going to be perceived by everyone as fair. There is always someone who will find some inequity in the way the plan is designed or implemented.

Luckily I don’t do that very often.  Instead we talk to our clients about is how can we minimize these feelings of inequity.  There are four key elements that we find help in this matter:

1. Due diligence. Obviously the first line of defense is to focus on developing a fair and equitable incentive plans.   That means that we look at all the factors that go into the plan and how those factors vary across territory and the nation.  Examine the data carefully and look to see if there are biases in the plan.  Do large territories really have it easier and always earn President’s Club?  Does the plan allow a smaller territory to shoot to the top just because they get one or two good sales?  Due diligence is your first line of defense.

2. Involvement. Secondly, you need to talk to your sales people.  One of the best ways of combating these feelings is to get people to the table when you are building the plan.  Get their input.  Have them work with you in determining the pro’s and con’s of a goal based plan versus a rank plan.  Walk through the statistical analysis on the total payout and how it is distributed across the country.  While in most companies, you can’t have the entire sales force do this, you can definitely bring in highly respected representatives and managers to help.  Form a steering committee and make sure you get representation from across the spectrum.  I often like to include one or two of the biggest naysayers on this and get them to the table (certainly keeps them quiet when the plan gets rolled out).

3. Communication. Third, you need to communicate the plans effectively.  This is one area that I see many companies fall down on.  They do the first two elements really good and then the entire communication of the new plan is in a 45 minute session on the last day of their National Sales Meeting that gets squeezed to 30 minutes and has half of the audience listening with a hangover.   Or it is sent out in a legal document that has 60 pages and the plan is detailed out in a language that makes no sense or is to daunting for most people to even read.  What is needed is a communication’s campaign that aims first to get people excited about the plan and the possibilities it presents.  Then the communication needs to move to showing the main elements of the plan in an easy to understand manner – what does the sales person need to do to earn X – what do they need to earn X+Y?   Then the details need to be explained.  They need to understand the nuances of the plan – how sales are credited, the way goals are set, how margins or exceptions are handled.  Finally, these items need to be repeated and reinforced throughout the year.  It is not enough to communicate once or twice and think you’ve done it.  This is a year long campaign that keeps the incentive plan front and center.

4.  Assessment. There is another step that companies often overlook – follow up assessment.  We like to make sure that we do follow up interviews or focus groups after the launch to see what areas of the plan are confusing to people or parts of the plan that people seem to be unsatisfied with.  This is vital in order to make sure that these areas of concern are addressed – either in plan design changes or in training to help people understand better.

While no plan can be 100% fair, companies can do a much better job at making sure that their employees don’t break into a little kid tantrums.

Give us your thoughts on incentive plans and fairness.  How do you ensure that people don’t play the “it’s not fair” card?  Click comment and let us know.

200 years of history in 4 minutes – fascinating!

Risk vs Reward – which is the more powerful motivator