In 1925, four climbers, led by Phil Smith, ventured north from Colorado to Jackson Hole, Wyoming to attempt to climb “The Grand Teton” mountain in the Teton Range.*  The Grand had been summited before, but these four climbers were coming at it from a different route, one that had not yet been explored.  From the valley floor of Jackson Hole it looked like they would have a relatively straight ascent to the peak.

The four climbers set out with high expectations of being the first to chart this new route.  As they progressed up the mountain, it looked like they were getting closer and closer to the summit.  One can imagine their feeling that this goal was within easy reach.  That is until they came up to the top of what they thought was a ridge.  To their dismay, instead of it being another ridge, it was the peak of an entirely different mountain.  The Grand was almost a mile away with a sheer 450-foot drop to the saddle between the peaks.  The four, not wanting to give up,  attempted to rappel down the face of the cliff.  They realized that it was too hard and too dangerous, so they gave up and headed back to Jackson Hole.

Before they left, they named this new summit point, Disappointment Peak.

It is not only climbers who run into disappointment peaks.  We often fall victim to this same dismay when we realize that the goal that we had set out to achieve is harder, will take longer, requires more resources or effort than we first envisioned.

Often, we too give up.

The four mountaineers had fallen victim to an optical illusion of the Grand.  When standing in the Jackson Hole valley if you look directly at the mountain, it seems as if Disappointment Peak is just part of the Grand.  The two peaks appear to be one and the same (see image). 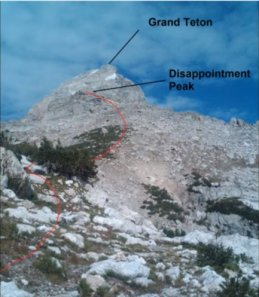 One of the elements of successful change is being able to anticipate how you are going to achieve that change.  We like to plot out the steps that we need to make in order to reach our goal.

The problem comes in when we encounter our own mental illusions – when we think that the goal is much closer or easier than it really is.

One thing that both psychology and behavioral economics have shown us is that as humans, we are really good at self-deception.  We have a number of innate biases that affect our belief formation and influence our thinking – from confirmation biases, base rate fallacies, availability heuristics, gambler’s fallacies, control illusion, and my favorite, the Dunning-Kruger effect (The tendency for unskilled individuals to overestimate their own ability).

Generally, we are overconfident in our abilities and underappreciate the difficulty that is required to achieve change.

These mental illusions set us up.

When our expectations of what this goal is going to cost us in terms of time, effort, energy, and resources does not match with reality and when we realize the summit is much further away than we thought – we become disappointed as well.

Moreover, just like Phil Smith and his companions, we can see the peak in the distance, but can’t seem to rappel down that cliff that is between us and the summit.

Three things to do when you reach your disappointment peak

We cannot always find a way to keep trekking on and reach our goals, but here are a few things to try:

Step back and look for new routes.

Over the years we have conducted a team building event called the electronic maze (see 5 lessons from the maze).  Envision a giant chess board comprised of 54 squares, where some squares beep and others do not, and teams are trying to get from one side to the other stepping only on non-beeping squares. 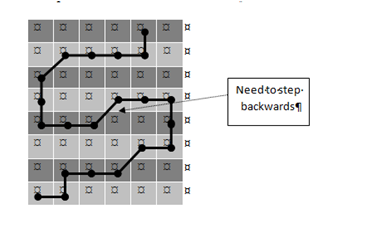 At one point in their journey through the maze, people tend to get stuck and keep running into beeping squares as they move forward to the other side.  The path goes backward here – but EVERY TEAM we have ever worked with has repeatedly stepped on one or more of the “beeping” squares that are in front of them.  Even after repeated failed attempts stepping on the same beeping squares over and over, they cannot fathom that if they just take a step backward, they will ultimately move forward.

Sometimes we just need to look around and see if there is a different path to our goal.

Do you have the right equipment to overcome your obstacles?  Phil and his team attempted to rappel down the cliff and felt it too dangerous.  Today, many climbers specifically go to climb and rappel down that very cliff.  The equipment and knowledge that people have today are much better than what they had 90 years ago.  Are there new or different tools that you could use to overcome your road block?  Would additional knowledge help you in continuing your journey?

Sometimes we just have to grit our teeth and power on through.  As Dory says, “Just keep swimming.  Just keep swimming.”  There are many times when we reach a point of dismay and our mental energy and enthusiasm collapse because it is going to be longer or harder than we thought.

If the goal is important, then sometimes the best solution is to continue to trudge on.  We can think of this as applying Newton’s first law of motion, “An object at rest stays at rest and an object in motion stays in motion with the same speed and in the same direction unless acted upon by an unbalanced force.” (NASA.com)  Our movement towards the goal has stopped, so we need to apply an unbalanced force upon it to get it moving again.

Plan ahead for obstacles.

Just because our mental illusions often trick us, does not mean that we will always be fooled by them.  Before beginning our journey, we can carefully map out the process and try to visualize what potential roadblocks we could encounter.  That process helps prepare us for when we do run into an issue.  In other words, we have primed ourselves and our expectations so that dismay will not fully knock us off our course.  Specifically, we should be asking ourselves:

We should also tap into our social networks and see if other people we know gone through this process or attempted this change.  These people can be our mentors and help work through with us some of the unforeseen obstacles that we had not thought about.  Their experience and knowledge can not only help identify potential barriers and how to overcome them but also might point us on a route that avoids those obstacles altogether.

Lastly, reexamine your goal.  Is it worth the effort, time and trouble that it will now take you to achieve?  If it is, keep going for it.  But don’t just blindly go on just because you started.  Climbers too often focus on reaching the summit at peril to their own lives.  Ed Viesturs, renowned mountaineer and bestselling author who’s summited Everest seven times says, “I’ve always had this motto that climbing has to be a round trip. I’ve always understood that getting off the mountain was more important than getting to the top…It’s OK. It’s not a failure…If you’re rushing, if you’re thinking it has to happen today, then you’re going to make bad decisions.” (Time.com) Sometimes it is ok to stop and say, not today.  I’ll try this some other time when conditions are better, or I’m in a better spot.

**Thanks to Michael Anschel for introducing me to the story of Disappointment Peak.

Questions or comments? Use the form below or email them to behavior@lanterngroup.com

A bike, some lights and motivation: what a stationary bike hooked up to an LED panel of lights can teach us about motivation!