Over the past few years, we have seen a shift in how organizations value their internal communications.  In the past, employee focused communications were often an afterthought.  Companies would spend significant time, effort and money on developing out their incentive plans, making sure they were designed to drive the right behaviors and performance, only to communicate it to the field in an e-mail with a 30-page, single-spaced legal contract attached.

Thankfully, this is starting to change.

END_OF_DOCUMENT_TOKEN_TO_BE_REPLACED

A bike, some lights and motivation: what a stationary bike hooked up to an LED panel of lights can teach us about motivation! 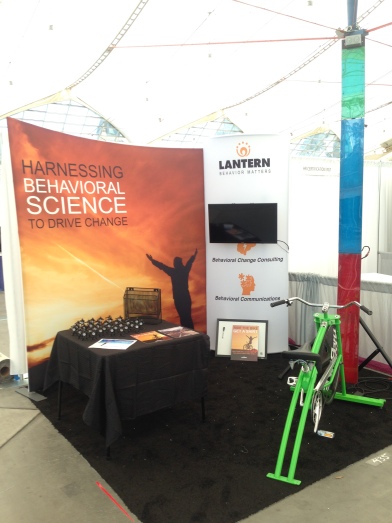 As part of our exhibit booth at the World at Work 2016 Total Rewards Conference, we designed a method for giving away our promotional t-shirts that simultaneously acted as an experiment to help us understand what motivates people.

What we found out was intriguing and reinforces some key behavioral insights about intrinsic and extrinsic motivation, recognizing accomplishments and having specific goals.

Our process involved a stationary bike that was hooked up to a bank of LED lights1 – the faster and longer you peddled, the more lights lit up, sounds basic enough right?

The six LED light panels set up on a vertical pole that lit up from the bottom to the top – once all six lights were lit up, all the lights flashed and the process was over.

We set our process up a little differently

To earn a very cool “Behavior Matters” t-shirt, all people needed to do was get on the bike and light up one of the lights.

We did not require that people light all six lights, and we did not assign a time length for peddling to earn a t-shirt.  All they had to do was light up one light – a relatively easy process. 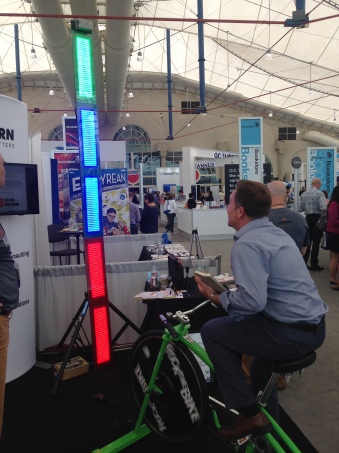 Additionally, people could get their name written on our leader board if they were one of the five fastest people to light up all the lights.  This white board with hand written names on it was updated whenever someone earned one of the top five spots.

Our original concept was to have people read one of two sets of written rules – one positive and encouraging; the other bland and discouraging.  The intent was to see if the different messages impacted how people performed or felt about the activity.  We quickly realized that our original plans were not working – too many people wanted to ride the bike and the process ended up being us telling participants the rules instead of them reading them thus invalidating the initial study.

Luckily for us, this is where things got interesting!

While the original communication experiment didn’t pan out, we were still able to gather very interesting findings.  Specifically we were intrigued by some of the insights we gained into extrinsic and intrinsic motivation, the power of leader boards, and the impact that specific goals have on performance.  First, let’s look at the overall results:

A total of 103 people rode the bike over the two days the exhibit hall was open (some participants rode multiple times).  Their performance is shown in table below.

The average ride time was 31.7 seconds – with the fastest time being 4.8 seconds and the longest time being 80 seconds.   There is some obvious differences based on physical fitness here as shown by the inverse time required to reach the different levels of lights (i.e., more time on average to reach 3 lights than 4 lights, etc.) which played out in how well people did.

Do you just want a shirt or are you looking for something more?

We needed to have an incentive to get most people on the bike.  True, there were some who just wanted to get on the bike and see how many lights they could get, but the vast majority of the people got on the bike to earn the t-shirt.  In other words, they needed an extrinsic reward to participate.

But that’s not the interesting part…

The interesting part was that only one person stopped at the first light (1 out of 103, that’s less than 1%)!  Once they were on, the majority of participants moved past the threshold for earning a t-shirt and continued peddling to see what they could do.  This was not easy – we had the settings on the bike be rather hard. This meant that peddling for more than 15 seconds was difficult for most non-athletes.

We believe once they started the activity, they intrinsic motivation of the bike  kicked in.  The lights tracked their progress immediately and they could directly see how they were doing against the goal.  They wanted to see what they could accomplish.  They no longer worried about the t-shirt – but instead, focused on the event.

In other words, they challenged themselves to see how many lights could they light up?

They had already committed to participate in order to acquire a t-shirt (the reward) – now they were pushing beyond what was required for the shirt because of the challenge that they were presented with.  If we think about the 4-Drive Model of Employee Motivation (for more info see here, here, here) we see that the Acquire component was instrumental in the motivation to initiate the event, but the ongoing motivation was propelled by the intrinsic drive to Challenge oneself and see how they could do.

The idea of using an extrinsic motivator to entice people to participate in programs or activities that they are not excited about and then allowing their natural Challenge drive take-over should not be undervalued.  Additionally, the more that a program uses a measure of goal progression, highlighting an individual’s progress, the more a participants Challenge drive is activated.  In other words, the design of your extrinsic incentive program can impact the intrinsic motivation that is activated. Finding cohesion between these extrinsic and intrinsic motivators can certainly help drive the right behaviors.

What’s up with the leader board?

We had a leader board where riders got their name featured if they were one of the five fastest people to light up all six lights.  They did not earn any additional extrinsic reward for being on the leader board – no fancy give-away, no grand prize, not even an extra t-shirt.

So did it make a difference?

END_OF_DOCUMENT_TOKEN_TO_BE_REPLACED 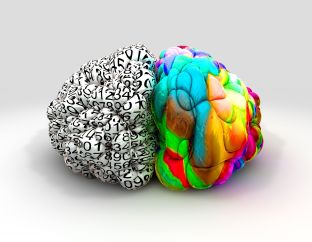 For the past 20 years, I have been exploring how people change their behavior.  This exploration has led me down many different paths and lines of inquiry.  One of the most fascinating areas of research that I’ve investigated surrounds the now hot topic of behavioral economics.

I often describe behavioral economics as the “fusion of psychology and economics in order to gain a better understanding of human behavior and decision making.”

So what do we find out when we fuse psychology and economics together?

Now that is not ground breaking news for most of us.  Even when I graduated with an economics degree, I knew that people didn’t always act in rational ways – or at least I didn’t  (otherwise why would I stay up watching bad T.V. until 2:30 AM when I knew I had to get up by 7:00 AM for a meeting or why would I spend a hundred dollars on a dinner out but fret over buying a steak that was over $10 at the grocery store?).

However, for many economists, that statement was hearsay.  Many economic models are based on the fact that people act in rational ways to maximize their own utility (i.e.,  happiness).  These theories stated that we might make irrational choices in the short-term, or when we don’t have enough information, or that at least your irrational behavior would be vastly different than mine so that on average, we would be rational.

The truth discovered by behavioral economics is that is not often the case.  We don’t act rationally – in fact, we sometimes act exactly opposite of how an economist would think we should act.

For example, research has shown that we will judge the value of an unknown item using totally irrelevant data to help us in that decision.  Dan Ariely ran a wonderful study where he asked people to bid on a wireless keyboard (something that they were not very familiar with at the time), but before they answered, they had to write down the last two digits of their social security number (a totally irrelevant piece of data).   The results of the bid were fascinating (top 20% being SSN that ended in 80 or above, the bottom 20% being SSN that ended in 20 or below):

This is a significant difference in how much they bid – entirely based on the last two digits of the SSN.

In a study that looked at drinking a large amount of water in two minutes – some people were offered a $2 fixed amount for finishing it – the other group was told they would earn either $1 or $2 (random chance of either).  So what was the result?

Note – that this doesn’t apply to people choosing to participate – existing research suggests that we prefer certainty over uncertainty when deciding if we should opt-in for a goal.  However, uncertainty is more powerful in boosting motivation en-route to a goal.

So what does any of this have to do with change?

We so often want to drive change in ourselves or our organizations and think through the process of this – in a rational and systematic manner.  I’ve worked with companies who are baffled that they don’t see a long-term increase in employee productivity and satisfaction after they increase their wage (Hedonic Treadmill Effect).  I know people who have mapped out their exercise routine for the next day, only to hit the snooze button instead of getting up and going for their morning run (Hyperbolic Discounting).

Too often we try to implement a change program based on a belief that we are rational beings.

Behavioral economics highlights that this just isn’t the case.