Janelle and her 10,000 Step Tracking Chart

Driving home from a wedding on January 2nd 2016, my wife was looking at her Facebook feed on her iPhone and made a little exclamation, “Wow!”

Of course that made me curious, so I said, “what was that for?”

“An old colleague of mine just posted that she walked 10,000 steps every single day last year.” she stated.

Now I was really curious, “Can you get me an interview with her!”

Fast forward a month and half and I sat down with Janelle at a coffee shop on the campus of the University of Minnesota where she worked.  For the next 60+ minutes I was enthralled listening to her story and asking a ton of questions.

“How did you do it?”  “What was your motivation?” “How were you supported?” “What was the hardest part?” “Why?” “What insight can you give to people who want to achieve something like this?”

How Janelle did it

I wanted to know how Janelle did it.

Walking 10,000 steps everyday is not easy nor is it a task that you can do by just forming a new walking habit.

It takes concentrated effort and dedication.  It requires that you have an emotional commitment to achieving your goal.  It takes support from friends and family and sometimes even strangers.  It takes coming up with hacks to motivation to keep that fire going all year long.

In my interview, I wanted to find out if Janelle employed any of the six actions that I’ve identified as being key to successful change (see here) and (here).   When I asked her about how she did it, she used all six to some extent: Engaging her emotions, Plotting her progress, socializing her support, harnessing her habits, enabling her environment, and preparing her plan to overcome obstacles.

One of the key concepts from the change work that we’ve done, is that purposeful change is more likely to succeed if you actively engage your emotions.

Rational change, we found, is not sustainable. However, emotions are hard to consciously activate.

We’ve found that one way to hack into those emotions, is to align your change with your self-identity.  If you can align your change behaviors with who you perceive yourself to be, then your behaviors become easier, and when you behave in ways not aligned with that self-perception, you feel angst to come back into alignment. 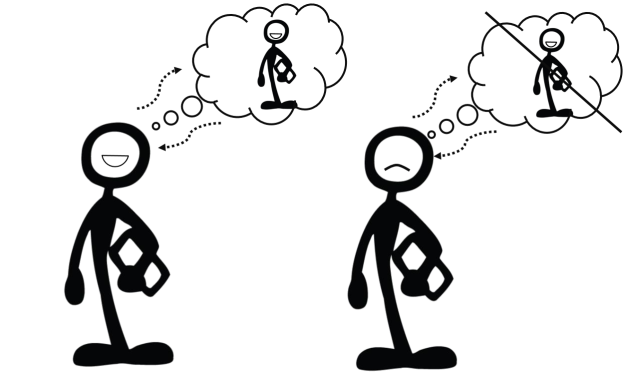 Within the first five minutes of the interview, without prompting, Janelle stated, she identified herself as a “walker”.  She talked about how she always liked to walk, how she walked with her mother when she was younger, that when she walked, she felt better.  In her mind, she identified who she was as a “walker” and that implied that she behaved in certain ways (walk instead of drive when possible, take the stairs – not the elevator, etc…).

By identifying herself as a walker, she was emotionally invested in those behaviors.  It made it easier to do them and harder to not do them.  Here is a picture from her Facebook page (Minnesotan’s will recognize the famous Walker Art Museum):

Plotting ones progress towards a goal is important.  Research has shown that progress, no matter how small or insignificant, provides humans with great satisfaction.  We know from behavioral economics that the closer you get to a goal, the more motivated you are to achieve it (see here).

Of course Janelle had her fitbit to track her steps…but that wasn’t all – she had her calendar.  Janelle had gone online and bought a special full year calendar (from Europe), had it shipped over and framed.  This was hung in her home office where she saw it every day.

Each day that she walked 10,000 steps, she added a sticker to that calendar.  Different colors represented different step counts.  Yellow was 10K, blue was 15K,  and red was 20K.

One interesting side note, was the amount of stickers she had actually added to her motivation.  Here is how she describes it:

“In November and December I gained some motivation by the fact that I was running out of yellows and eventually blues. So, I had to walk more to get to the 20K level (red).”

She also set up motivational milestones.  She created a “walk wish-list” of different places or walks that she wanted to do.  She posted these to her Facebook page (adding a social element  that we will talk about later).  When she achieved these walks, she was able to check them off her wish list.

Additionally, Janelle joined a fitbit group (again, we will talk more about the social aspect of this in a bit) that had different walking challenges.  Fitbit calls these challenges, “a fun way to help you stay motivated by competing with friends and family.”  These mini-challenges helped provide ongoing ways to measure her progress.

Her fitbit group also had a leaderboard that showed her daily steps compared to those in the group.  This was a way to track her progress not only against her goal, but as part of a fun competition against others.

When she decided to commit to her 10,000 steps a day for a year challenge, she purposely posted her decision on her Facebook page.  She told me that she did this to create  accountability.  By publicly stating her intentions, she enlisted her Facebook friends to become part of her social support team and keep her on task.

We often feel more pressure to do things for other people than we do for ourselves.  I call this “other focused motivation.”  For some people, this motivation is much stronger than the motivation that they have to complete things for themselves.

Enlisting others in her journey, Janelle was able to tap into that “other focused motivation.”  Her fitbit group also helped in this.  Not only did they help keep her accountable, but they challenged her.  Seeing how well they were doing motivated Janelle to do even more.

Janelle also talked about how her friends would support her through doing “walking dates.”  Instead of going out for a coffee, her girlfriends would ask to go for a walk.  Her husband made it an effort to go walking with her on a regular basis – as an opportunity to talk and bond.  In this sense, walking became a keystone routine, one that enabled other good outcomes (bonding with friends – in this instance).

Janelle set up her environment

Work on change highlights how much of an impact our environment has on our behaviors. By creating an environment that is supportive of your change, one is more likely to achieve that change.  It is my belief, that environment is one of the strongest factors that allow people to achieve their goals.

The environment that Janelle had set up for herself was a key part of her success.  We have already talked about her tracking calendar – which she set up in her home office,  a place that she went every day.  This constant reminder provided motivation everyday that she saw it and the different stickers on it.

Janelle harnessed her habits and routines

Habits and routines are key to long term behavior change.   Harnessing these habits can be the difference between success and failure.

One of my favorite routine hacks that Janelle did was how she changed how she went to the bathroom. Literally, she changed which bathrooms she used at work.  Instead of going to the closest restroom, she would walk to one that was on the other side of the building or a different floor.  This simple routine change, added hundreds of steps (if not more) a day.

She used the same if-then approach by using the web app IFTTT (www.ifttt.com) that would send her reminders based on specific rubrics she could set up (i.e., if I haven’t reached 10,000 steps by 6:00 PM, send me a text).  This helped to ensure that she didn’t actually “forget” one day or as a way of motivating her to continue.

Janelle planned for how to overcome obstacles

One key aspect of her 10,000 step journey, was realizing that she would need to overcome some key obstacles.  Too often our goals get hijacked because we run into an obstacle and don’t have a plan to overcome it.  Obstacles can be big or they can be little – but if they are not accounted for, they can derail our best efforts.

One of those obstacles for Janelle was the Minnesota weather – if you don’t know, it can get bitterly cold in the winter here.  Sometimes in January and February it can be below zero for weeks on end (in 2014 we had 53 days with lows below zero in Minneapolis).

So Janelle made a plan and got a gym membership (actually two – since she was able to use her work gym as well).  She used this for when the Minnesota weather was not conducive to walking outside (which can happen in January / February a lot).  In the end, she stated that she didn’t end up using these as much as she thought – but the fact that she had the options are a huge stress reliever.

She also knew that on her vacation to Puerto Rico she would be out of her normal walking routine – and that would be an obstacle that she needed to overcome.  She set up a plan with her husband and family to do more walking tours and specifically focused on exploring the island through walking to many destinations.

One question that I asked her was if she thought it was easy.  Janelle’s answer, summarized was “no, it wasn’t easy…but it wasn’t hard either.”

In essence, I believe that she had set a goal for herself that matched her self identity and tapped into the emotional well that we all have.  She took steps to keep her motivated and enlist support.  She used routines and set up her environment to make it easier for her.

Did it take effort and work – yes!  Was it something that she felt compelled to do –  yes!  Did it become a part of her daily routine – yes!

When we talked in February, she had continued to walk over 10,000 steps each day.  She no longer had a goal to do it everyday for a year – but it had become part of who she was.